There are several large I beams laying on the bottom around 30 feet.

To get to this site, you’ll need to launch your boat from the Devil’s Fork boat launch just to the West of the Edgemont bridge. I started diving directly under the Edgemont bridge and went East. There is a gradual slope that allows you to easily go down to at least 40 feet. I didn’t go deeper than that, as it was a bit murky. There are several large I beams laying on the bottom around 30 feet.

The river feeds in to the lake nearby, and it was causing a slight current while I was here. Not anything strong enough to pull you away, but it was strong enough that you’ll drift west if you don’t swim against it.

I didn’t see a lot of fish here. 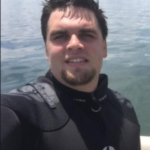