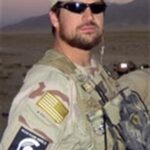 On July 27th, 2013 a group of Arkansas Scuba Divers placed an underwater memorial for Chief Special Warfare Operator Adam Lee Brown, who was a U. S. Navy SEAL and Hot Springs, Arkansas native. Adam’s life was the subject of the book, “Fearless: The Undaunted Courage and Ultimate Sacrifice of Navy SEAL Team SIX Operator Adam Brown”. The memorial was placed at Blakely Dam in Lake Ouachita in the Hot Springs, Arkansas and is accessible to both land & boat based divers.

In memory of Adam and the way he lived his life, the memorial is known as “Fearless Rock”. It is funded entirely by private donations.

The memorial consists of a laser-etched, black granite marker to CPO Adam Brown placed into a large rock, as well as another large stone that contains Adam’s favorite Bible verse. We hope that it will stand as a lasting tribute to Adam as well as an inspiration to the diving community.

If you have any questions about the memorial or donating, please feel free to contact Will Stevens at 501-744-7422 or by email at: westevensma@hotmail.com or frmemorialfund@gmail.com.